In spite of the current economic crisis, we think that 2011 has been a year full of opportunities for people and for the product design sector, specially. Expensive products such as Apple's are selling worldwide like freshly baked bread and emerging economies with massive population are increasing their purchasing power like crazy.

For two things, economic crisis and necessity has brought innovation, and currency fluctuations around the world has shifted business opportunities. Suppliers and job leads are now in places you wouldn't expect before.

Our hopes are that it was very good, healthy, and productive.

For Interloft, it was a really great, mind-blowing year. We had really interesting projects, especially in the housewares and promotional area. Many products being manufactured by the tens of thousands.

What's the scenario for 2012?
Next year poses some challenges for Mexico, where elections will take place and that almost always means some turmoil and less confidence. However, slow but constant currency devaluation means production is shifting back to the country, and China's is becoming more expensive. North America, but specially Europe are at crossroads and we will have to watch closely. Asia is still growing, but developed countries' slowdown may be a bit harmful. Interloft is undertaking some investment plans both in the product supply and the development sectors, we'll let you know soon!

Our wish for you is that 2012 is full of emotions, innovation, hard work, and love.

Posted by Unknown at 5:48 PM No comments:
Email ThisBlogThis!Share to TwitterShare to FacebookShare to Pinterest 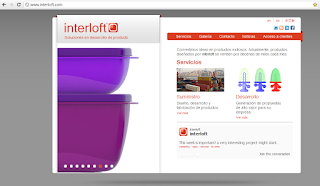 Hi everyone. It's been some time since we announced our webpage. Now finally, it is ready and up.

We made a friendly webpage keeping focus on two things: 1.- To show our current and potential customers what we can do to help their businesses, and 2.- To show the product development process, which we think is one of our biggest assets: we know how to transform an idea into a profitable product.


As you'll see, the webpage is relatively simple. We spent a lot of time figuring out if it would be worth to illustrate the design process and some other interesting stuff, but the outcome was that usually, our clients visit our webpage looking for solutions, not long explanations or Flash intros. That's why we will have some pictures in the Gallery area, but there's also a link to our Facebook page, where pictures of ongoing products will be shown for our clients to see.


Of course, there's the twitter feed, and links to our webpage in Spanish, and a shorter version in Chinese. China as a manufacturing hub is quickly evolving into a product developer, too. We have plans on expansion there for the mid-term.


Well, that's it for now, hope you enjoy it, and please let us know what you think!
Posted by Unknown at 9:26 AM No comments:
Email ThisBlogThis!Share to TwitterShare to FacebookShare to Pinterest
Labels: interloft.com

Evaluating our own assets for product success

We see successful and not-so successful products all the time, everywhere.

Products that required a great investment and did not succeed, cheap products that are great, and products that did not advertise but viral marketing put them in everyone's mouth. We know that providing a 100% success guarantee formula for success is impossible, so we won't try to do that. However, after a few years of experience with products, we've seen a few factors that go beyond having a great idea and that evaluating them with a quick, honest glimpse will provide us with a panorama on how good our chances are. As stated in the title, they are internal, within our organization aspects.
1.- Idea
Everyone's had great ideas. So, we're not going to discuss whether it is good or not. Besides that, what is good? Just build them up and then we'll see.
2.- Conversion
This is where the interesting part comes. Or just like they say in Spanish, the "meat" starts. One thing is to have a great idea, but another one is how easy, convenient, expensive, and realistic it is to bring it to life. Think of the advantages and disadvantages of having helicopters for everyone to get to work, for instance. Or having today, 2011, a smartphone with the power of a 12-core processor. Sure it's a great idea, but the means and the price will surely get in the way.
3.- Investment (time, money and assets)
Tricky one. We need to honestly assess how much it'll be needed to: develop, test, manufacture, pay suppliers, create space on a supply chain, distribute, deliver, and give credit to our intermediaries / final customers before we start to make money out of our idea. Can we handle it?
4.- Distribution
Aha. Last but not least. Actually, together with the Idea, we think this is one of the most important ones.


Companies like Amazon and Walmart have the power of Distribution Lines. Products might be great, but if they don't comply with these companies' distribution policies, they're not going anywhere. Is your product going through existing lines, or you have your own? Is it strong enough?

We hope you find this useful next time you plan to invest in a new product.

This work is licensed under a Creative Commons Attribution-NoDerivatives 4.0 International License.